Innovative Ways the Public are Solving Their Pothole Problems

We are all aware that the UK is currently suffering from some serious pothole problems, and this year Tyre Savings took on the challenge of researching the shocking pothole statistics across the nation. Our insight enabled us to look at the areas around the UK which are causing the most disrupt to road users whilst also looking at which county winning when it comes to looking after their roads. Find out more about the UK pothole problem and explore the best and worst pothole areas of the UK here.

Neville Daytona from Wroughton, decided enough was enough in his local area. The pothole ridden streets weren’t gaining the attention of his local authorities, so he decided to think creatively and have a bit of fun with the people in the area, however it gained some slightly unexpected publicity.

This unsuspecting anti-pothole campaigner decided to put a doll’s head in a pothole that had caused the road to be cordoned off and down to one lane for months. We asked Neville some questions about his pothole ordeal and the fantastic stunt that gained both the media and his council’s attention!

What gave you the idea of filling potholes with doll’s heads?

“I had been thinking for ages of what to do, as I wanted to give the impression of something emerging out of the water. A mannequin top half would have been great, but too big really, as well as possibly causing a danger to traffic. They also cost a lot of money, so a doll’s head seemed the next best option. The first head went ‘missing’ and that made me more determined to carry on, so I started collecting them in case any more went away – I still have a few left!”

Could you tell us about your worst pothole experience?

“Some years back I was riding my motorcycle and was forced to the side of the road when a large lorry came the other way. I hit a pothole and luckily did not fall off however my front tyre was badly damaged and had to be replaced at a cost of £130. I claimed off the council who paid the claim and filled the hole soon after. I had photographic evidence in case it was disputed (which it wasn't).”

“I also had two front suspension springs break on my car which needed to be replaced - the mechanic said that potholes are likely to be a contributing factor. Most of the roads I use have potholes and when riding my motorcycle, I hope I'm OK when swerving to avoid them as they can throw you off balance.”

Why do you think the public are resorting to their own ways of filling potholes?

“I guess it's frustration at the general condition of the roads combined with lack of action to put things right. This is overlaid with the ever-increasing cost of using the roads.”

Neville makes an interesting point. The cost of using our roads is constantly increasing, whether it’s road tax, car insurance or petrol, motorists in the UK are paying money to drive on roads that should be both safe and efficient. Major roads in the UK are funded by the central government and managed by the Highways Agency. However, local councils and authorities are responsible for local roads; these are funded through local council taxes, fees and central government grants (Loc.gov, n.a). 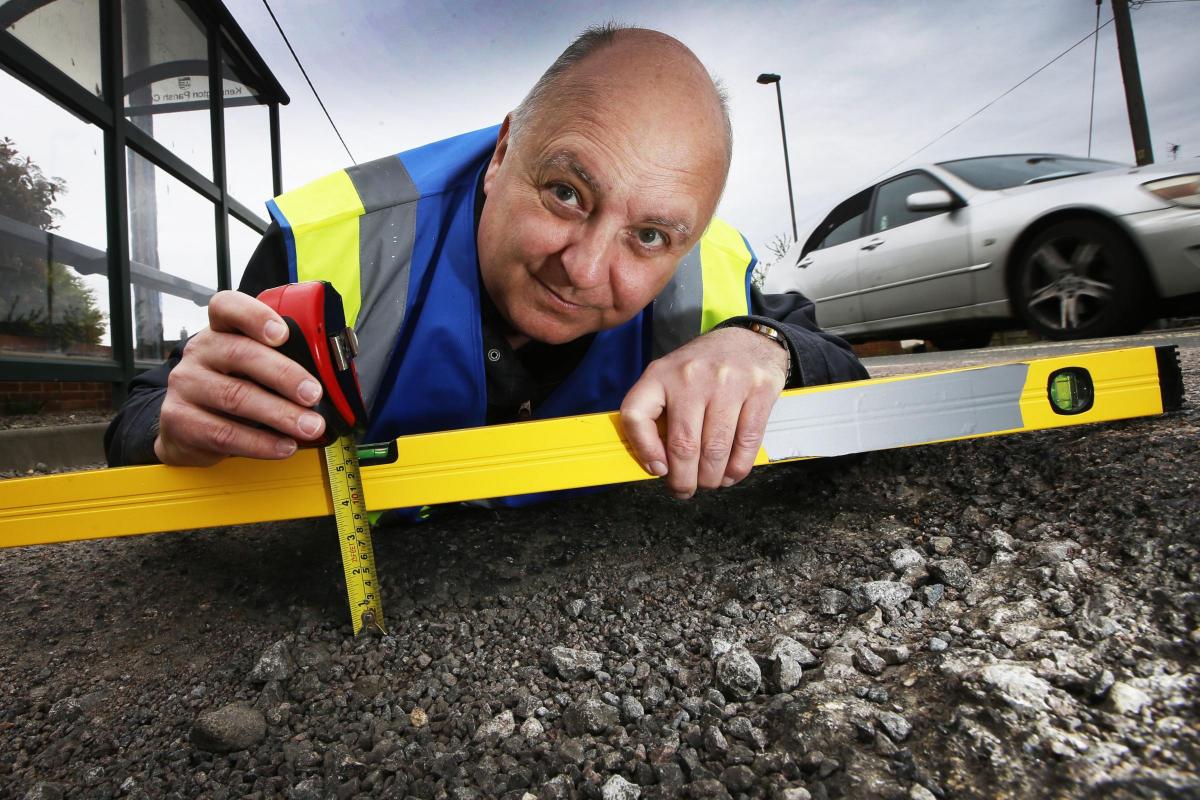 Mr Pothole: an anti-pothole campaigner with a difference

In his local town of Brackley, and now even across the globe, Mark Morrell is somewhat of a celebrity and local hero. Known as Mr Pothole, Mark has been successfully campaigning against potholes for the last five years. With a career in the gas industry and excellent knowledge on the roads infrastructure and maintenance here in the UK, Mark has taken matters into his own hands to fight against our pothole problem.

From celebrating pothole’s birthdays with cakes, to filling holes with plastic ducks to reporting potholes to the police, Mark has certainly proved that innovation and taking things into your own hands is often one of the best ways to go when you feel like you’re being ignored by the council.

But whilst these acts are great way to gain the attention of the media and the local authorities, Mark has been working tirelessly in the background, studying the problems of our roads and governmental funding since 2013.

Currently, Mr Pothole is working very successfully on two campaigns to fix potholes in his area. Mark recently worked with a local newspaper and asked readers to vote for their most pothole-ridden, problematic road. With this information, Mark issued formal complaints to the council and made Freedom of Information requests to receive history of the road and the number of pothole reports. This local council, anticipating what was coming next, did the works and are planning on further works in September 2018.

Although this campaigner has received great success, he understands the difficulties when it comes to both reporting to councils and Highways England. “Recently, somebody reported a pothole on a Friday afternoon, and this didn’t get seen to until the Monday and in the meantime, somebody was injured. This was taken to the Court of Appeal where the decision was that repairing potholes should be a 7-day a week service and making dangerous potholes safe within 24 hours after the report.” Ironically, it is currently Highways England policy to make potholes safe in 24 hours and make a permanent fix within 28 days, but this is not always adhered to.

We managed to speak to Mark about his experience, what he thinks is causing the severe pothole problem and what should be done next:

What was your first experience with reporting a dangerous pothole and ultimate getting it repaired?

“On an A-road in Brackley, a dangerous pothole through a village that was on a bend, was causing people to swerve into oncoming traffic. I made several attempts at trying to get the council to do something about it, and eventually I threatened to call the police. They didn’t repair it, so I reported it to the police - within 2 hours it was repaired – if somebody was killed I would never forgive myself so I took it as far as I could do.”

Mark then went on to tell us about two more potholes on the same road and the same process was followed again. Mark was not prepared to call the police to get potholes fixed any longer, and after speaking to his local area manager for the council, created an anti-pothole Facebook page that received over 200 followers in just two days. Not long after the local media picked up his campaigns, he was contacted by Channel 5 and appeared in a documentary called Pothole Britain.

How can the pothole problem be solved?

“Most motorists indirectly are incurring costs of damaged tyres, wheels and tyres suspension. No one wants to pay more taxes or increase fuel duty, but if it is costing motorists over £70 a year each in damages due to badly maintained roads, adding a separate section to road fund license, that is completely road fenced and is purely dedicated to road maintenance, is a good idea.”

Mark went on to discuss how this would be a much better investment for road users. Not only would this help motorists ultimately save money but could conjure up an extra £1 billion to invest purely into the road network to get on top of the road network maintenance.  Mr Pothole also believes that this money should only be allocated to councils once they have proved that they would use it to fill potholes and repair roads to the highest of standards with in-depth contract proposals and past experience considered when applying for the funding.

“It [the road maintenance infrastructure] needs a full review. To fix the problem, 80% is funding available to councils. The other 20% is maintenance such as quality inspections, supervision and contracts.”

Mark will no doubt continue his work to get as many dangerous potholes fixed as possible and sharing his insight about the pothole problem in the UK; check out the Mr Pothole Facebook page here for more information about his campaigns.

Pothole mosaics: art installations that fill holes in the road

While the public are certainly interested in taking pothole matters into their own hands here in the UK, it doesn’t differ across the pond. A graphic and mosaic artist named Jim Bachor delightfully fills potholes with incredible mosaic-art that brightens up the street. We managed to speak to this creative artist to gain some insight into why filling potholes with art installations could be the way forward!

Where did you get the inspiration for your art installations?

“The initial idea was for the mosaics to bring a little PR to my fine art work via a bit of my humour – some series are based on ‘universal truths’ – everyone hates potholes while almost everyone loves flowers or ice cream or junk food.”

Why potholes and not something else?

“I think that’s the whole idea – it’s absurd! The basic background is that potholes are an on-going problem and they are never really permanently fixed (like the one in front of my house that started this all in May 2013). I had a passion for this crazy durable art form that can last a thousand years – so I combine the two issues – made a custom piece of art and installed in a pothole and it took off from there.”

Would you ever consider coming to the UK to fill our pothole problem and if so where?

“Sure, in fact I’m in talks with a guy out there now about that very thing. I was also thinking about doing a London-specific Kickstarter to fund a campaign.”

With pothole installations in Chicago, Detroit, Los Angeles and even Finland and Italy, it would be interesting to see if Jim’s colourful mosaics would be accepted by the UK public.

You can check out more of Jim’s work on his website that showcases all of his pothole installations. With series such as “Fanciest Pothole” that includes Burberry and Gucci style mosaics, as well as the “Treats in the Streets” series that features life-like ice cream and ice lolly mosaics, it is safe to say that Jim’s imagination runs wild whilst filling potholes. According to Jim Bachor’s Instagram page, New York City’s Department of Transportation have already started to extract the mosaics out of the street despite receiving very positive comments and people even thanking Jim for ‘adding beauty’ to their neighbourhood.

Although we appreciate the innovation of these anti-pothole campaigners, we at Tyre Savings would always recommend reporting potholes to your local council and take necessary legal action when needed. Head over to the Tyre Savings Facebook page and let us know what you think about the potholes in your area.