There is nothing quite like the magic of escaping the outside world and sitting down to watch a film with some popcorn and your favourite drink. Over the years, there have been some incredibly iconic films and some even more iconic vehicles within them.

From Ghostbusters to Jurassic Park and everything in between, we are looking through the very best cars featured in the world of film. 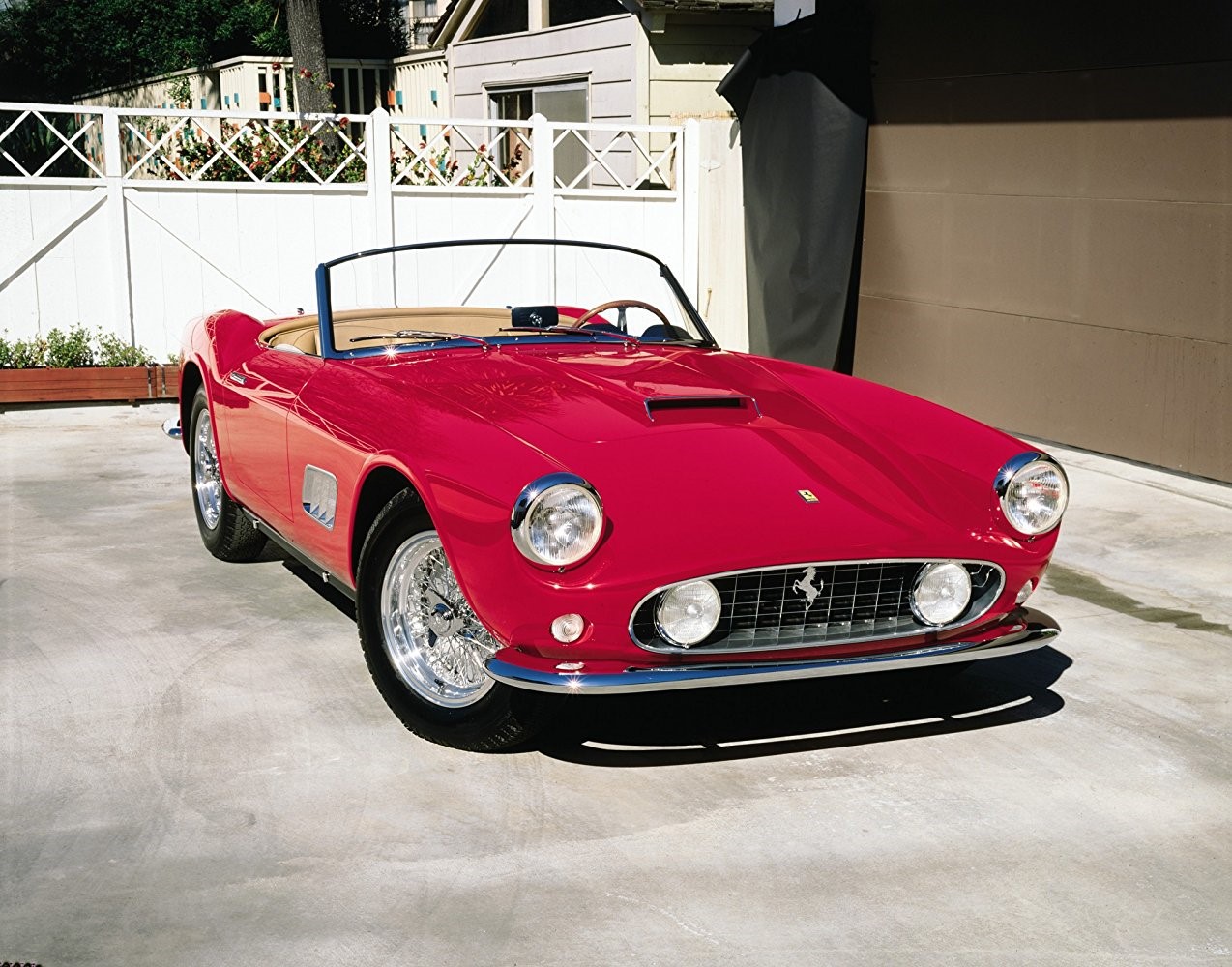 Unbelievably, Ferris Bueller’s Day Off was released over 30 years ago. We can only apologise if that makes you feel old. The 1986 classic teen comedy starred a young Matthew Broderick who skips school for the day with his two friends.

Perhaps even more famous than the film itself is the Ferrari 250GT from 1961. The iconic red sportscar was the pin-up of people across the country and remains, arguably, one of the manufacturer’s most stunning vehicles.

What you perhaps didn’t already know is that the Ferrari’s inclusion in Ferris Bueller was almost not meant to be. The original script put together by director John Hughes called for a Mercedes AMG to be used in the film instead. The specific model was never mentioned, but it’s highly likely that it could have been the pretty 500SL.

For the majority of the film however, replica 250GTs in the form of a Modena Spyder were utilised with only close-up shots requiring the use of a real Ferrari. When it comes to wheels, the 250GT had beautifully designed alloys integrated into 15” tyres. Nowadays, both Michelin and Pirelli manufacture rubber that would fit the Italian stallion.

We are of course talking about the brilliant 1984 comedy and its sequel, rather than the controversial 2016 reboot starring Melissa McCarthy and directed by Paul Feig. Ecto-1 is an incredibly iconic machine, immortalised over the years in LEGO, Playmobil and even Hot Wheels replicas.

Built by the Miller-Meteor company, the vehicle used was a 1959 Cadillac Fleetwood Professional Chassis, a car from one of the most iconic brands across the US. In the film, Ecto-1 is bought in used condition by Dan Aykroyd’s character, Ray who makes significant repairs to it.

Interestingly, the original incarnation of Ecto-1 was a much more sinister black car with white and purple strobe lights mounted to it. It was only after the interference of cinematographer Laszlo Kovacs, who pointed out the film was mainly set at night, that the car was changed to the iconic design we all know and love.

Nowadays, Cadillac, owned by General Motors, produce seven different vehicles sold across the US, Canada and China, as well as 31 other markets worldwide. They also sell cars in the UK, but they are a rare sight with a sparse dealer network comprising of only two showrooms. 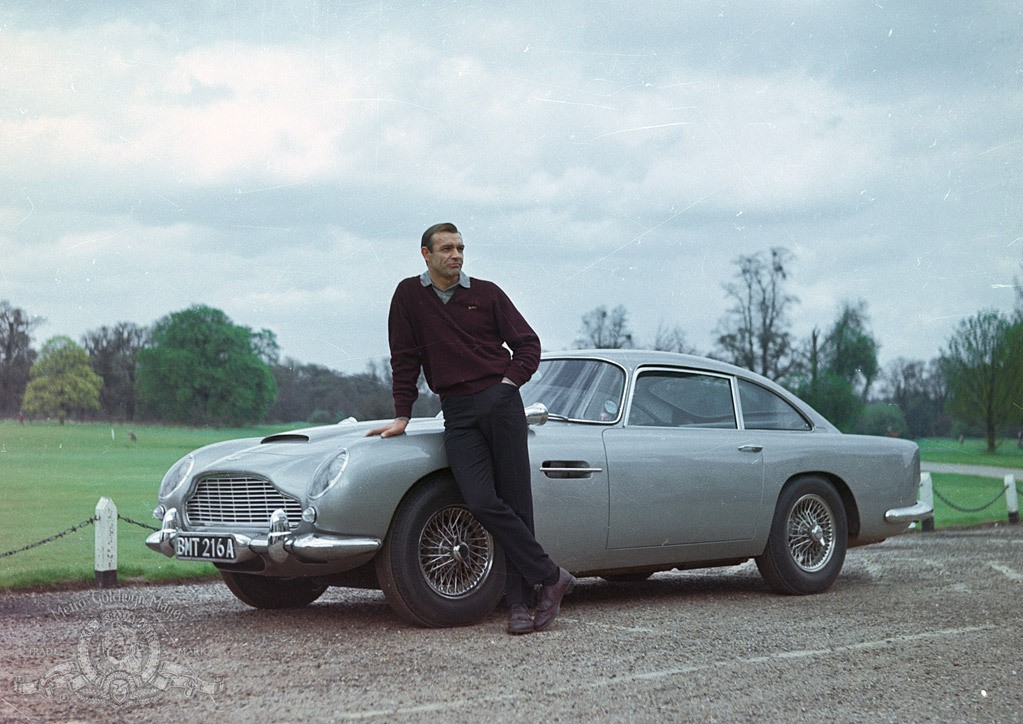 Is there a more iconic film series than James Bond? We’re not sure. However, what we are sure about is the vast range of absolutely gorgeous vehicles 007 has had to play with over the years. From Aston Martins to Jaguars and BMWs, the secret agent has certainly had a lot of metal over his vast film history.

Nothing could be more iconic however than the beautiful Aston Martin DB5 from Goldfinger. Rendered in stunning grey-paint with its multi-spoke Borrani alloy wheels, it is immediately recognisable as an Aston Martin.

Nowadays, these cars demand a premium on the used-car market, selling for upwards of £500,000 and definitely hitting that coveted ‘collector’s items’ status. Originally, the DB5 was fitted with 670H15 Avon Turbospeed crossply tyres or 185VR15 Pirelli Cinturatos, though these are no longer suitable for our modern roads. 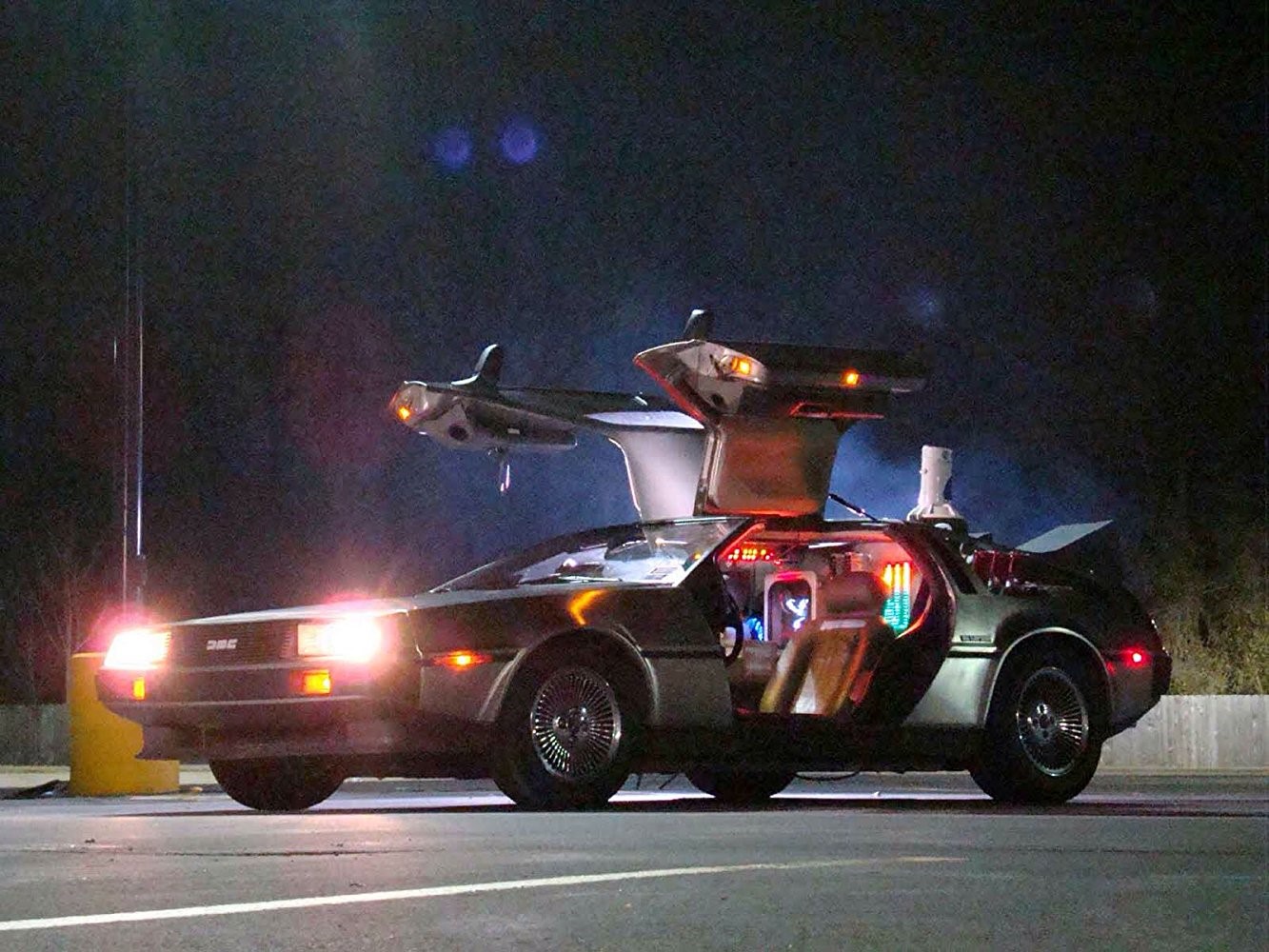 Back to the Future: DeLorean DMC-12

From Marty McFly and Doc’s special friendship to the classic rock and roll soundtrack, there are many reasons that Back to the Future is one of the most iconic films of our time. It was so successful in fact that it spawned two decent sequels and produced one of the most recognisable vehicles ever: the DeLorean DMC-12.

Lit up like a Christmas tree and packed full of time-travelling features, the DeLorean is the thing every child wanted to be real from the Back to the Future movies; that and the hover boards. Of course, the car itself was very real, though without the time-travelling capabilities.

The Back to the Future DeLorean came straight from the factory fitted with Goodyear NCT radial tyres in the following sizes:

These tyres have been discontinued for many years. If you ever see a rare DeLorean driving on the roads today, they will likely have Toyo Extensa, Vredestein Giugiaro, Ohtsu FPO0612 or Kuhmo Solus KR 21 tyres.

Goodyear NCT tyres may no longer be available, but Goodyear are still producing excellent quality tyres to this day with a huge variety available to suit any driver’s personal preference.

The original Jurassic Park movie is one of Steven Spielberg’s biggest blockbusters; released in June 1993, this ahead-of-its-time movie made nearly $1billion at the box office. Not only did the dinosaurs make an impression on movie-goers, but this action-adventure classic also saw fans collecting miniature Ford Explorers and even attempting to recreate the famous vehicle in the years that followed.

In the movie, the 1992 Ford Explorer XLT was in fact the main Tour Vehicle of the dinosaur park. Each vehicle possessed leather interior and a somewhat garish yet memorable body art that has been etched into our minds since the release of this iconic film. With a bright green and yellow exterior and huge headlights, this modified Ford would have been a hard one to miss.

The Ford Explorer that starred in the movie showcased BF Goodrich tyres. To this day BF Goodrich provide excellent mid-range tyres that boast great grip performance and a comfortable drive.

Fast forward over 20 years since the original Jurassic Park movie and the Ford Explorer has advanced in many more ways than the body art. No longer available in the UK, the brand new 2018 Explorer Platinum can be bought in the US. It boasts a redesigned exterior with LED signature lighting and a new grille design.

If you’re looking for a similar version to the classic Jurassic Park Ford Explorer here in the UK, the closest you can get is the Ford Edge or Kuga. These stylish SUVs have become staples on British roads and are supremely popular in the Crossover/SUV market. 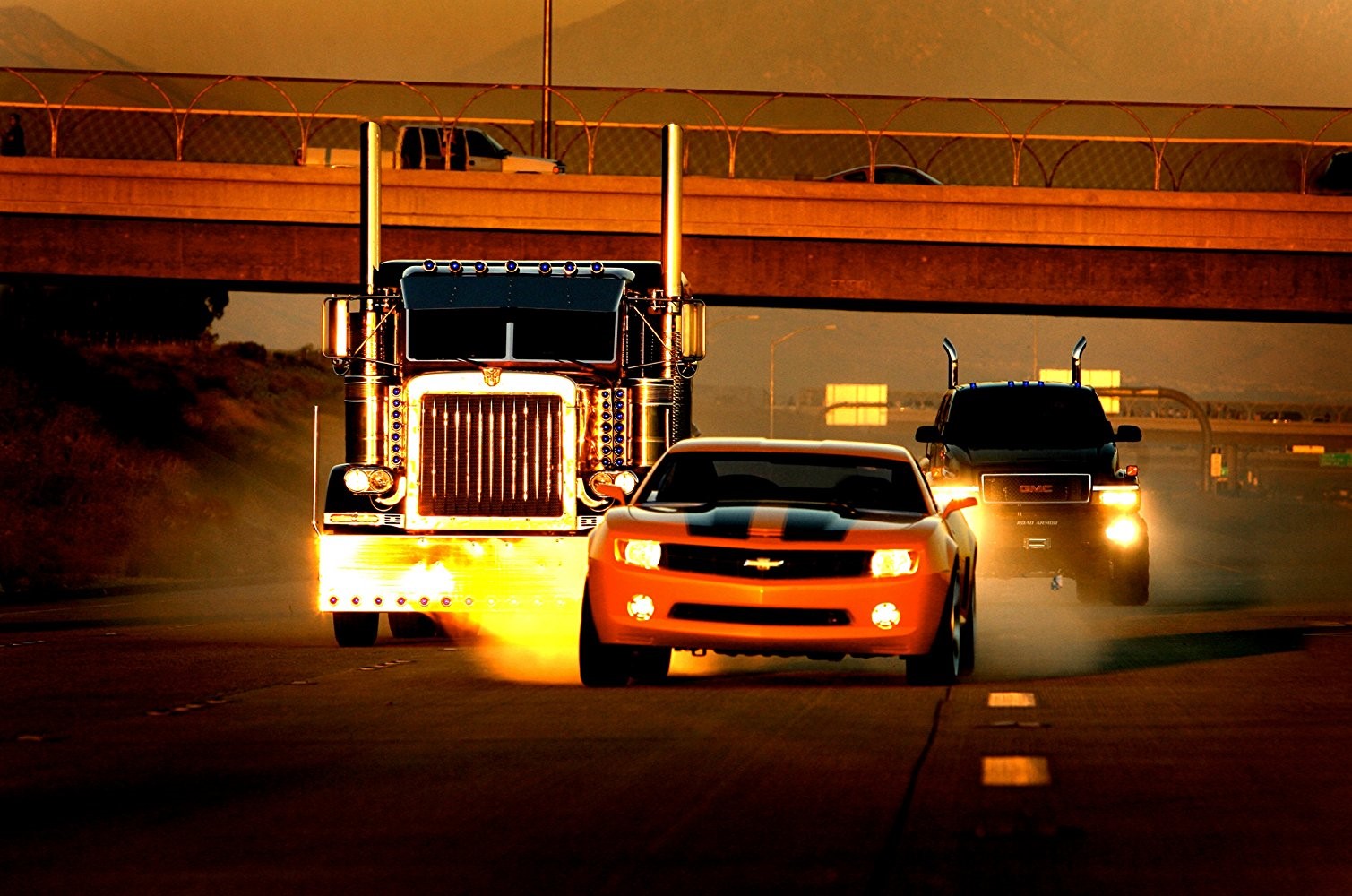 Michael Bay’s Transformers movies haven’t been the critical darlings that many people would have wished for when the first film was released way back in 2007. Fast forward a decade and one thing they do have going for them is to evoke feelings of car envy.

Movie mascot, Bumblebee, has featured in all the Transformers movies and has become the pin-up of many a teenager across the UK. His bright yellow and black paintwork has become a staple of the franchise along with the Chevrolet Camaro that has represented him for over 10 years.

Being an alien robot, Bumblebee has had many incarnations of the Camaro over the course of the saga. The first film features a bruised and battered second-generation Camaro from 1977, eventually morphing into the sleek fifth-generation model.

In Transformers: Dark of the Moon, an SS model Camaro was used. Its sequel, Age of Extinction featured a Camaro that had been specifically designed for the film and was not available on sale in that guise. Finally, the 2017 film, Transformers: The Last Knight saw Bumblebee updated again to a sixth-generation model. Phew! That’s a lot of Camaros. 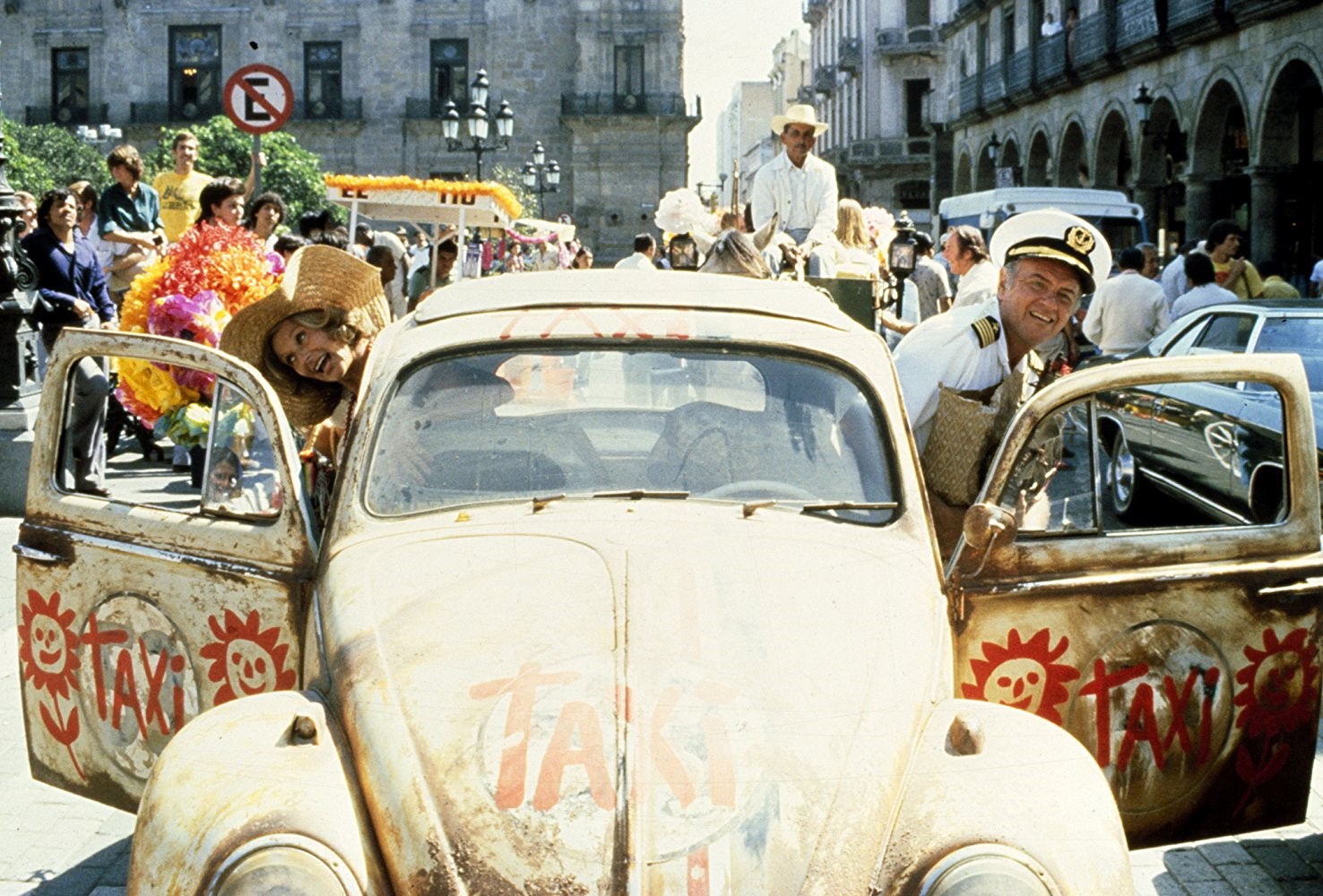 The Volkswagen Beetle is one of the most iconic cars on our roads and it’s easy to see why. The cute exterior was immortalised by the mischievous Herbie in films like Herbie Goes Bananas from 1980 and his very first movie appearance, 1968’s The Love Bug.

Such is his popularity that the anthropomorphic car had films running up until 2005 when Herbie: Fully Loaded was released in cinemas across the world. Nowadays of course, the Beetle has been updated and given a more modern and refreshed design, but the infamous 1938 original has achieved classic status.

Although difficult to find out what tyres Herbie wore in his movies, the original Beetles, should you see any on our roads, would probably feature 15” rubber. Pirelli and Michelin offer tyres that would suit the car. 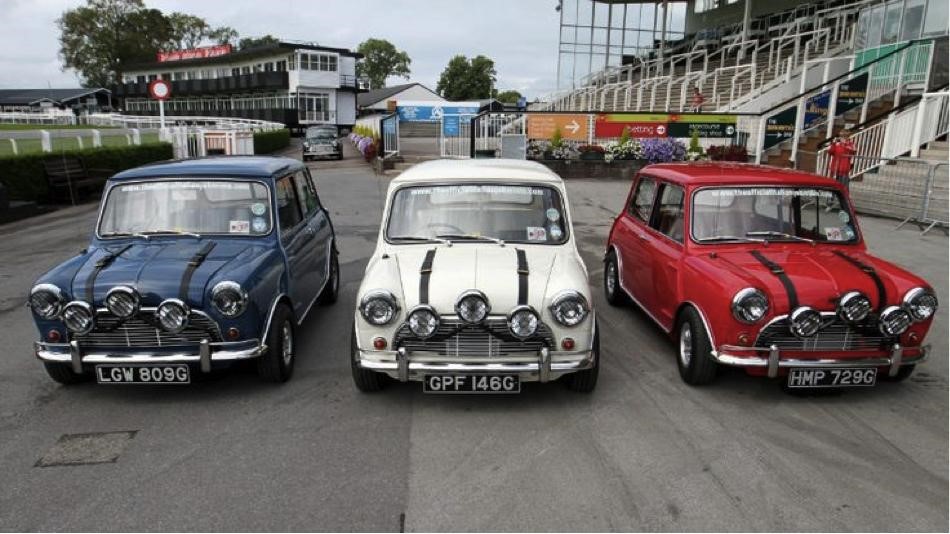 The original Mini is a British-made car that has defied the ages. After the design was used and updated by BMW in 2001 to create the modern-day mini, the popularity of the car exploded. Fast-forward to 2018 and Mini, a standalone brand still owned by BMW, make a variety of different types of vehicle including the Countryman, Clubman and of course the sporty Cooper S variant.

But nothing will compare from the Austin Minis of old. Those cars were the main reason why people watched 1969’s The Italian Job. The red, white and blue cars had a personality all their own. Their miniscule frames and lightweight construction meant weaving in and out of tight Italian streets and performing the jaw-dropping stunts was a doddle. No CGI needed!

Adorably, the cars featured in the film only wore 10-inch tyres, a stark contrast to the 18, 19 and 20-inch wheels we see on many modern cars on the roads nowadays. In fact, many modern Minis from the BMW era feature 17-inch wheels. Put an original Austin Mini next to a modern variant and the size difference is enough to make your jaw hit the floor. Trust us on that.